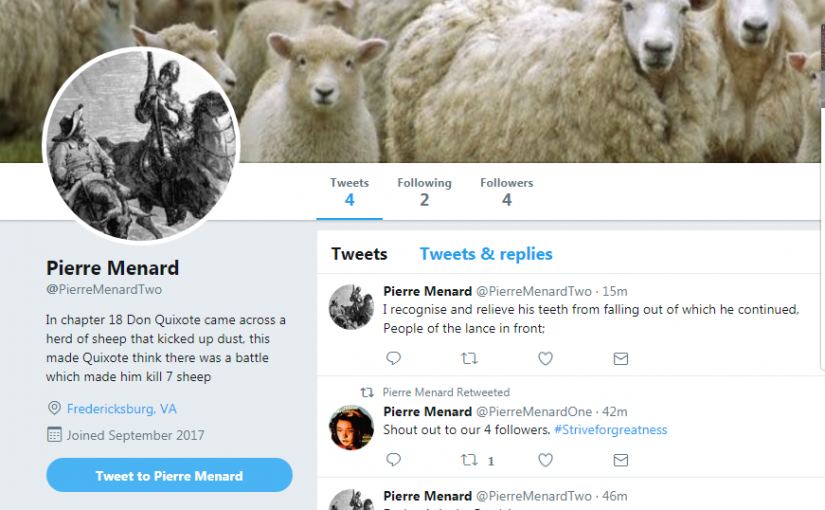 This week in my first-year seminar Digital Don Quixote, we discussed authors, narrators, and readers. We read chapters 28-37 of volume 1, which includes a plethora of narrators and narratives from new characters like Dorotea and Cardenio, to an intercalated story of mysterious origen,»The Curious Impertinent.» In addition to the novel, we read Borges’  short story «Pierre Menard, Author of the Quixote«, which forces us to reconsider the roles of author and readers.  Our final reading of the week was Michel Foucault’s 1969 essay «What is an author?» Heavy stuff for first-years that’s for sure.

But thanks to my colleague Zach Whalen from the Department of English, Linguistics and Communication, and director of our Digital Studies program here at Mary Washington, students delved more deeply into issues of authority and authorship, of narrators and readers and of how we make meaning out of texts. Zach first shared with them a program of his design that simulates Pierre Menard himself authoring the Quixote, while through your computer browser you are able to reconstruct, word-by-word, the infamous chapter nine of the Quixote. 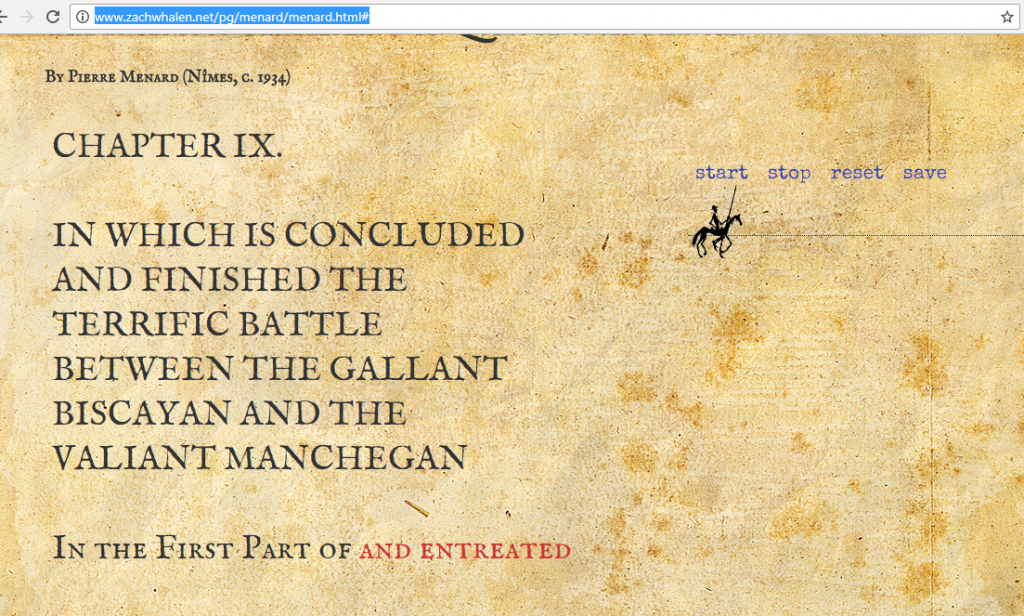 After showing the students how a computer can actually be a Menard, another «author» of the Quixote, he then taught us how to make a Twitter Bot as another way to «write» the Quixote, 140 characters at a time. Using a spreadsheet method that Zach has developed for his own students, my students set up three Twitter accounts which are now tweeting in 140 characters bits of of the novel taken from a selection of their choice through a «Markov-chain» algorithm (and if you don’t know what a Markov-chain is, which I did not either, Here is a good description of what a Markov-chain is and how it works,) The students chose to focus each twitter site on a different episode or chapter of the novel. There was «Pierre Menard One» that used the story «The Curious Impertinent» as the base of their site: 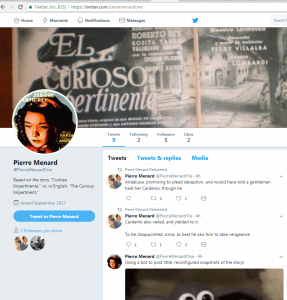 «Pierre Menard Two» took the account of the «army of sheep» as its inspiration. 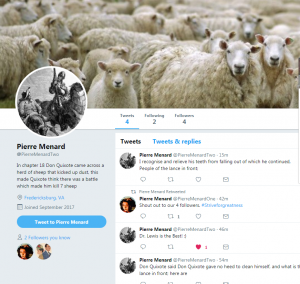 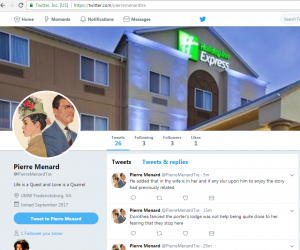 Cervantes himself obscures his role as author and purposefully distances himself from his text(s): there is the missing text found in chapter nine (the subject of Menard’s recreation) and identified as the work of an Arabic historian Cide Hamete, that then needs to be translated to Spanish; there are the the multiple narrative perspectives of the tangled love story of Cardenio-Dorotea-Fernando-Luscinda in chapters twenty-four through thirty-six; and finally from this week’s selection there is the unsigned manuscript that is discovered at the inn and read aloud to the guests in chapters thirty-three through thirty-five–«The Curious Impertinent,» an apt title for our bots which are certainly curious, sometimes rough or rude, and perhaps even outright irrelevant.

We will see over the weekend if our little bots replicate the style and meaning of their original selections from the novel, but I wonder at this concluding statement by Foucault and its implications for narrative and authority in our digital age of new ways of text creation:

I think that as our society changes, at the very moment when it is in the process of changing, the author-function will disappear, and in such a manner that fiction and its polysemous texts will once again function according to another mode, but still with a system of constraint–one which will no longer be the author, but which will have to be determined or, perhaps, experienced. Michel Foucault, «What is An Author?» Aesthetics, Methods and Epistemology. Edited by James D. Faubion. Trans. Josué Harari. New York: New York Press, 1998. 205-222.

Are we at that moment? My students and I are pondering this question right now.