My year with Don Quijote

I’m halfway through my special year with Don Quijote, and I really need to reflect on the first-year seminar (FSEM) I gave last semester in English Digital Don Quixote–its successes and where I had some problems–along with my first impressions of an advanced undergraduate seminar in Spanish I’ve just begun Cervantes y Don Quijote 21 . In both I’ve tried to introduce students to the novel, some of its major critical interpretations, its modern reception and adaptations, and ways in which it connects with our 21st century digital world. 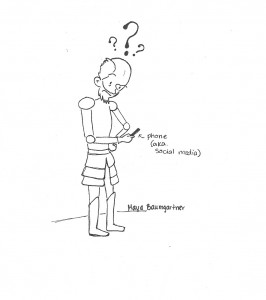 Don Quixote and his cell phone by student Maya Baumgartner

The FSEM focused on identity, Don Quijote’s and our own digital identity. It also introduced some major topics of digital humanities and digital studies, using the novel as a springboard into these issues. We read selections of the novel in English, and some articles related to the novel and to digital studies/digital humanities. Students wrote a critical review and presented the article or book reviewed to the class. At then end of the semester students formed groups and created a digital and written project on some aspect of the novel in relation to the themes of the class. Fall 2014 was also the inauguration of a new Information and Technology Convergence Center on our campus, so we were able to make good use of the many resources located there now from our Division of Teaching and Learning Technology, to the Speaking and Writing Centers, and the library. I had a bright bunch of 14 first year students, and had so much fun with them that I’ve decided to offer the course again in the fall of 2015. But before I do, and before I forget, I need to reflect a bit about what went great, what could have gone better, and what I might do differently:

So now it’s a new semester and I’m on to phase two: Spanish 451: Cervantes y Don Quijote en el Siglo 21. Our main goal in the course is to read all of the novel in Spanish, and to examine some of the major issues of the novel, along with its critical interpretations. But we’re also looking at the modern reception of the novel, its numerous adaptations, and we’re creating our own digital presence for Don Quijote on our website through a wiki: Don Wiki-jote. I’m also trying to make all this work a little bit fun with a friendly competition–each student taking on an avatar based on a character from the novel, and logging their progress through “progress posts“, which I then record on a progress meter on the Reto Don Quijote.

Already we’ve had some problems, mostly due to a lack of familiarity with how to create a blog post, what a “category” is, and how to edit a wiki. But hopefully we’ll overcome these issues soon and the technology will stop being a hurdle and turn out to be a help to them as I had hoped–aiding their study and inspiring them to keep going the end!!