I wanted to write a final blog expressing how much fun, and how informative, this faculty initiative of #umwdomains was for me. I found the topics in Weller’s book to be provocative and the discussions in my cohort to be stimulating. I always left with lots to think about, and some new ideas I wanted to try out in my own teaching and research, and on my new domain. It also got me thinking about my own engagement with technology up to this point. I’m in an in-between generation as technology goes. I remember the days before cell phones, email, and the internet, and yet technology entered my life  young enough that it’s been part of my coming-of-age. Here’s a picture of me and my little brother (also a college professor now!) with our (really his) first gaming system Christmas 1979. I thought it was an Atari, but my brother tells me it was an Odyssey system, because our dad, also sort of a techno geek before his time, thought it might be more educational for us. I was a freshman in high school here, my brother in third grade. 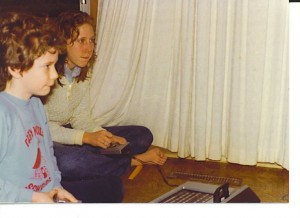 We had a pc at home pretty early. Later in college I actully took a Basic programming course and learned to program the computer to print out my name (it was «Basic» after all). In 1992, as I was finishing my PhD, I received a book as a gift for joining the American Society for Eighteenth-Century Studies, Hypertext: The Convergence of Contemporary Critical Theory and Technology by George Landow (Johns Hopkins UP, 1992)–a sort of ironic welcome to a very luddite organization, but its membership is managed by Johns Hopkins, so I guess there was a connection. Reading this book, with a graduate student’s knowledge of post-structuralism and no knowledge  or experience whatsoever of the internet, Landow’s analysis of this new medium blew my mind:

Hypertext, as the term is used in this work, denotes text composed of blocks of text — what Barthes terms a lexia — and the electronic links that join them. Hypermedia simply extends the notion of the text in hypertext by including visual information, sound, animation, and other forms of data. Since hypertext, which links one passage of verbal discourse to images, maps, diagrams, and sound as easily as to another verbal passage, expands the notion of text beyond the solely verbal, I do not distinguish between hypertext and hypermedia. Hypertext denotes an information medium that links verbal and nonverbal information (Landow, 4, and here’s a hyperlink to a digital copy the author has provided.)

About the same time, a friend named David Gardner decided to stop publishing a small print newletter called the Motley Fool,  to which my husband and I subscribed (out of friendship more than interest in investing, since we were newly weds hunting «real» jobs, and with student loans to repay!). He told us he was putting it on something called AOL.  So we joined AOL. Flash forward 20 years, and Landow finally makes sense to me!

The conversations we had, and the issues we debated through UMW domains, have in a way connected the dots to my own experiences with technology, and helped me see a little more clearly how I want to engage technology professionally with my students, my colleagues and my research.