This week in my freshman seminar Digital Don Quixote, we are addressing the question of copyrights, Creative Commons and plagiarism at the same time we have been reading chapters 7-9 of Part 1—the iconic windmill scene followed by the less well known episode of the interrupted battle with the Basque squire. In the latter episode, Don Quixote’s battle with a Basque squire is interrupted when the narrator reports that the manuscript he is reading is truncated, and that the rest of the story is missing. On a quest to find out what happened in the story and to the missing text, while perusing a market in Toledo, the narrator discovers a text in Arabic that when translated turns out to be the missing text—the History of Don Quixote de la Mancha by Cide Hamete Benengeli, Arabic historian. The story continues where it left off, and Don Quixote defeats his challenger. This ingenious narrative interruption underscores Cervantes’ parody of the popular novels of chivalry (as he claims to be his main aim in this novel) which often also had supposed historian’s telling of the heroes feats. But also the many layers of narration—narrator, translator, historian, Cervantes himself—complicate the readers interaction with the story. Don Quixote´s “history” is a copy of a copy, with multiple authors presenting, interpreting, and commenting on it as it passes from some supposed true events to its present form. All the while readers participate in this chain of narration, themselves interacting with it, and even changing it. This will become even more the case in the second part when Cervantes has a real-life copier of his novel—the unauthorized sequel to Don Quixote by Avellaneda that was published between in the ten year gap between the first and second volumes—which he takes care to debunk throughout the second part.

When I paired these readings from Don Quixote with the readings on issues of copyright and plagiarism, some of it had to do with what I saw as some loose connections on the topics of authorship, and some had to do with a visit I scheduled with our Center for Honor, Leadership, and Service. To prepare for that visit students have also read a blogpost by Shelly Carson, a Psychology Today contributor, «Plagiarism and its Effects on Creativity.» I also thought that at this point it would be fun to work with some animated GIFs to represent some of these important episodes in the novel to encourage the students to experiment a little with some new digital applications. So hurredly before class on Monday morning, I made the above GIF, taking a couple seconds of video from a television film version of the novel directed by  Peter Yates, and starring John Lithgow into an application called makeagif.com. You can see the results of my 30 seconds of work above. Nothing too impressive, but sort of fun. But then I thought, did I just plagiarize?

Our own Center for Honor has an infographic on its website to answer my question. 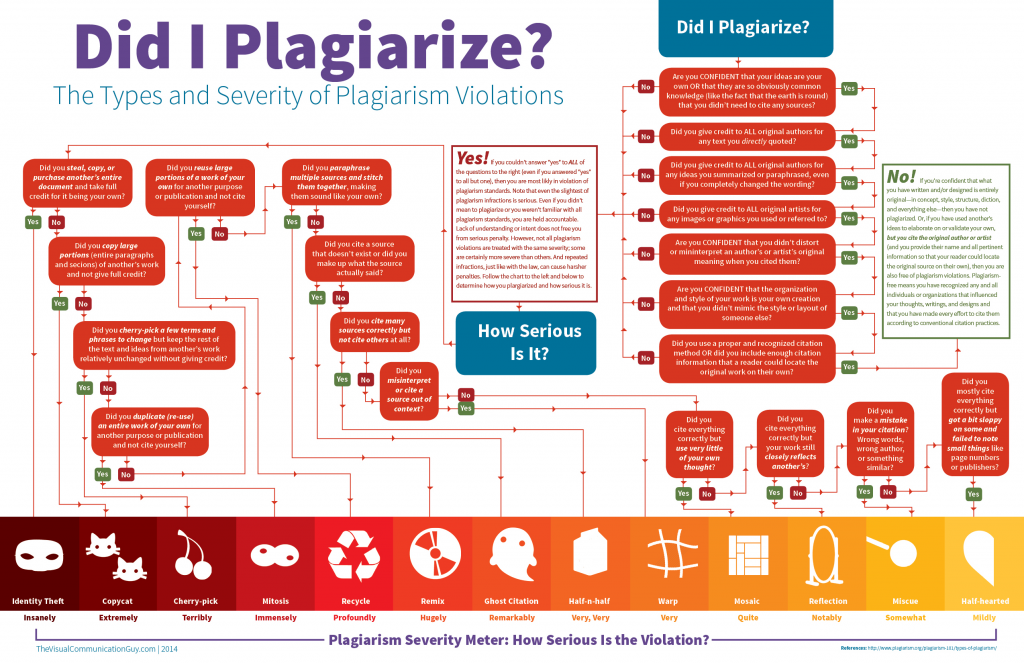 So I don’t think I plagiarized. Whether or not my GIF is within the “fair use” definition of the copyright laws is another question, which blogger Peter Van contemplates in this blogpost “Do Animated GIFs Infringe on Copyrights?“ Basically, no one has really challenged GIF creators use of copyrighted material in court…yet! Shelley Carson sees plagiarism as symptomatic of our digital age’s «dumbing down» of culture. Are GIFs (and the related internet memes)also contributing to this dumbing down? Is  my 5 second loop of a windmill spinning round and round and round and round…creative? Certainly I could have put more thought into it, combining the images in a more interesting way, maybe added my own special touch, all of which would have been more possible if I had photoshop and not a web application to work with! GIFs are a great example of our imitative postmodern aesthetic. GIFs can be parody or pastiche, and their endless looping of the same series of images are unique to our digital internet culture. Which is where I think they connect with Don Quixote, which also repeats and re-presents its story multiple times through multiple voices. Readers become authors who in turn become narrators. Let the battle resume!