Is this the “future of the book”?

This blog post is about a particularly alarming situation in my university’s library, my reaction to it, some musings about what it might mean for my institution and others like it, and also what it might mean for us as educators and readers. I am not intending in this blog to disparage anyone, most especially the librarians at my university, whom I’ve experienced as always supportive of my work as a researcher and educator. Mostly I hope to spark some conversation among faculty and librarians—at UMW and elsewhere–about what this means for us, and our students. I begin with a picture, probably worth the roughly thousand words of this post, but also, in this case, worth a thousand books… 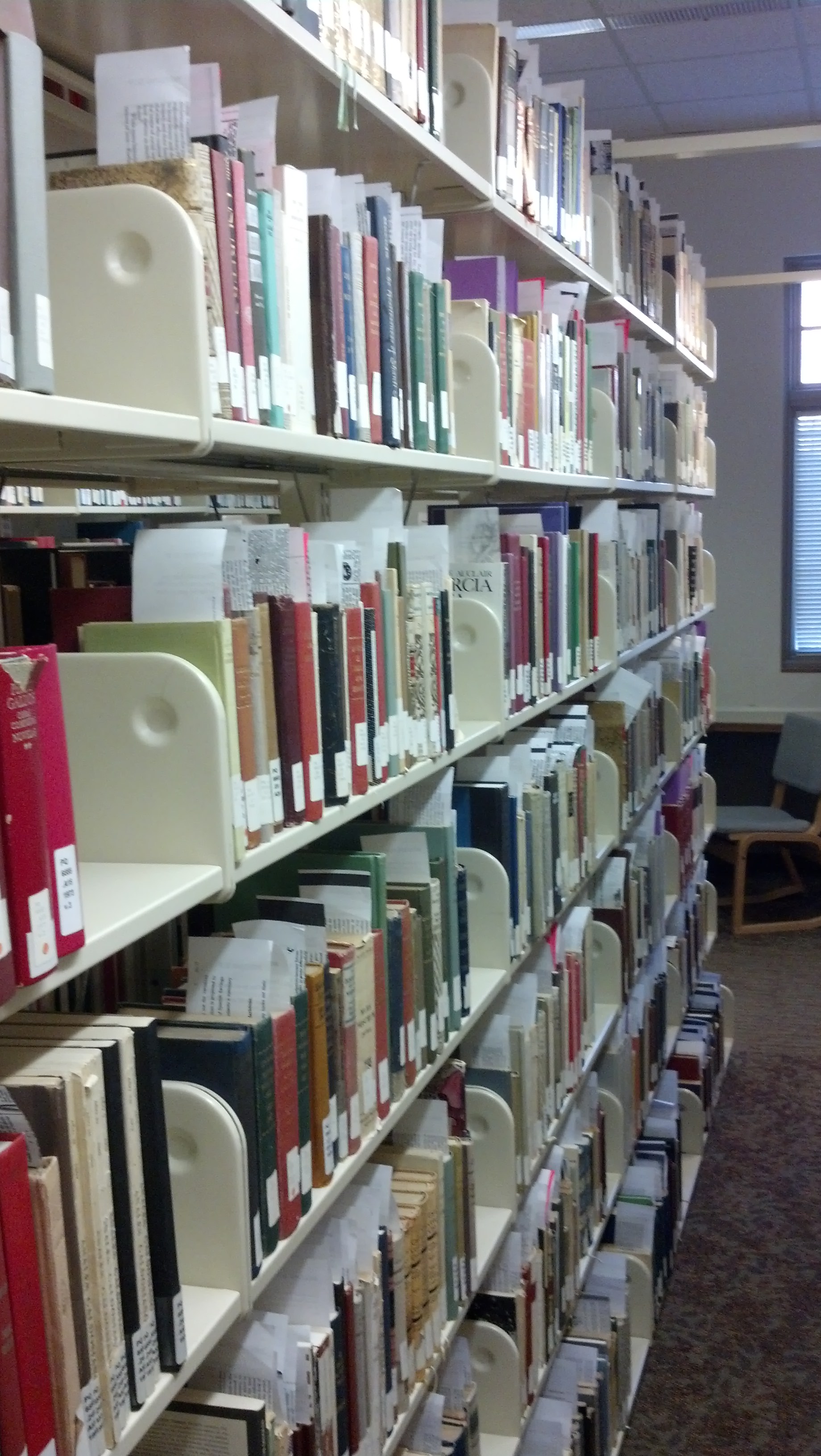 This picture is representative of the hundreds of books flagged (with the little white and purple slips of paper) for removal from my university’s library. These books were chosen for the most part because they had not been checked out of the library in over 15 years. These are the PQ shelves corresponding  literary works in Spanish, and works of literary history and criticism about them. In this picture, the tail end of a long row of books in Spanish, I estimate about 250-300 books are tagged. And these are just a sample. There are many more flagged, more in peninsular Spanish than in Latin American. All of the books in Portuguese are tagged. Most of the books in Italian. I didn’t even get to the books in French and German, although I know my colleagues in those languages have been through the collection and were stunned at the number tagged, as I was. Most of these books are classics in the field: some are canonical works by important authors and thinkers, others are important historical literary histories or seminal studies in their field. 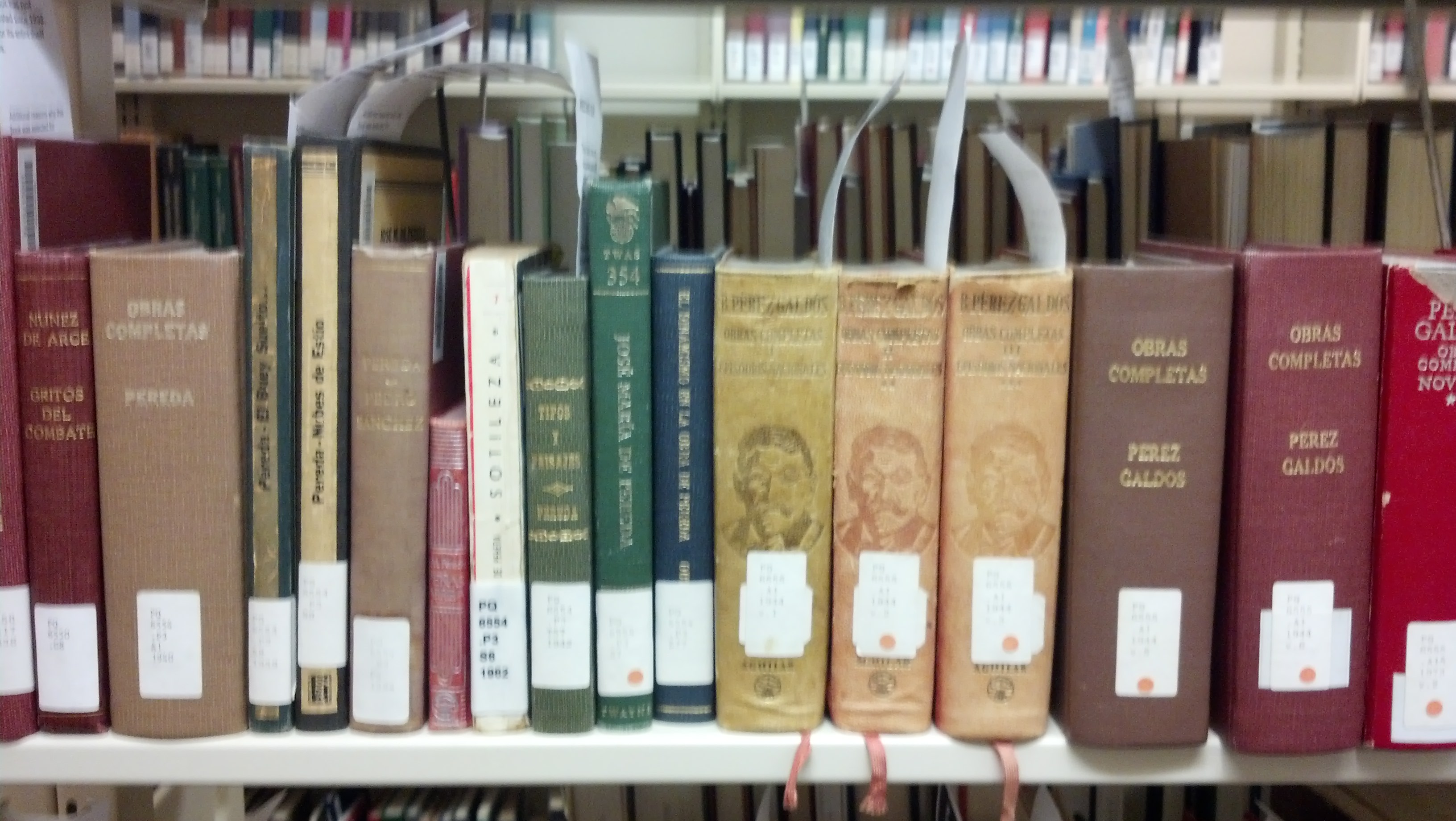 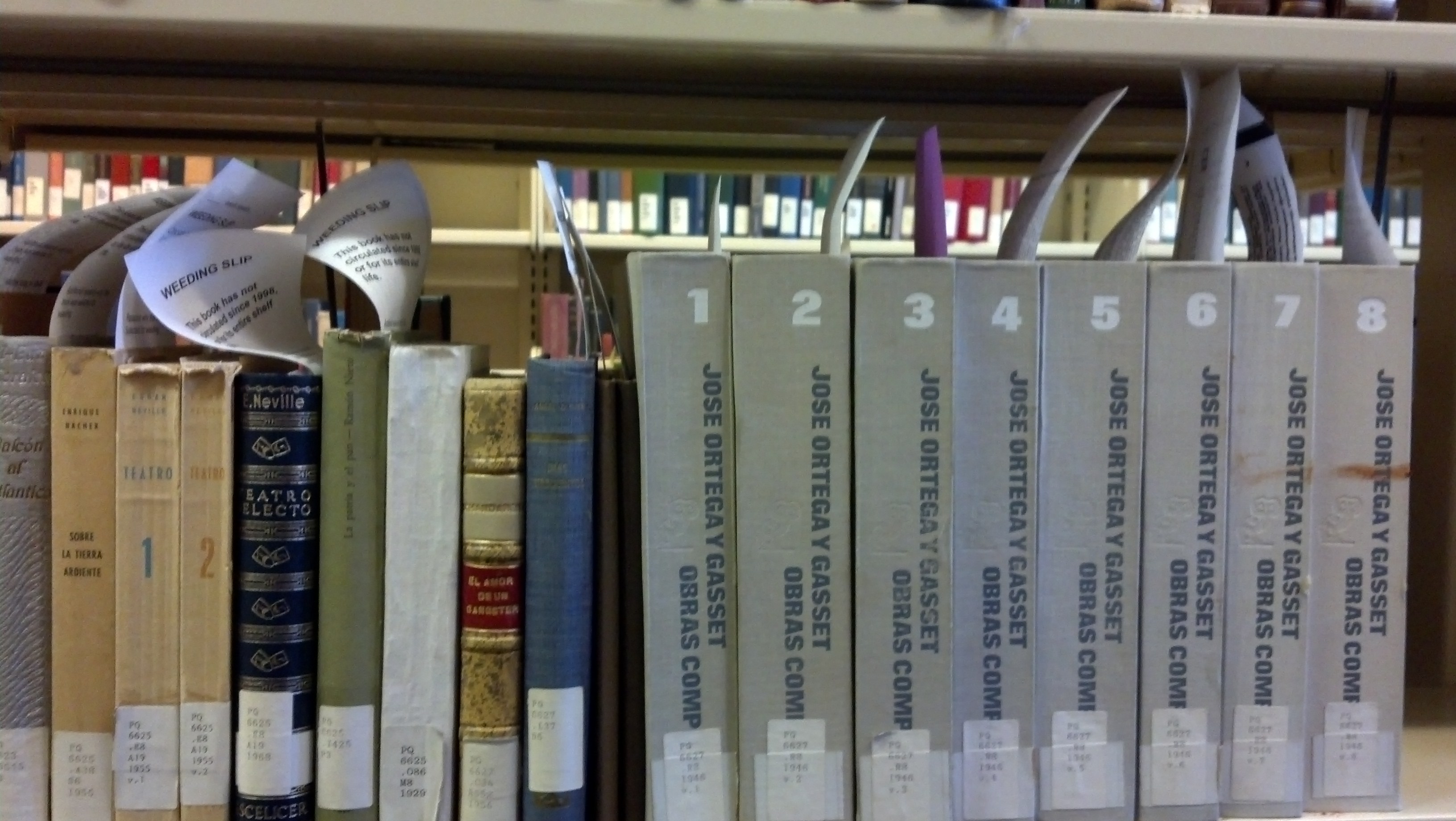 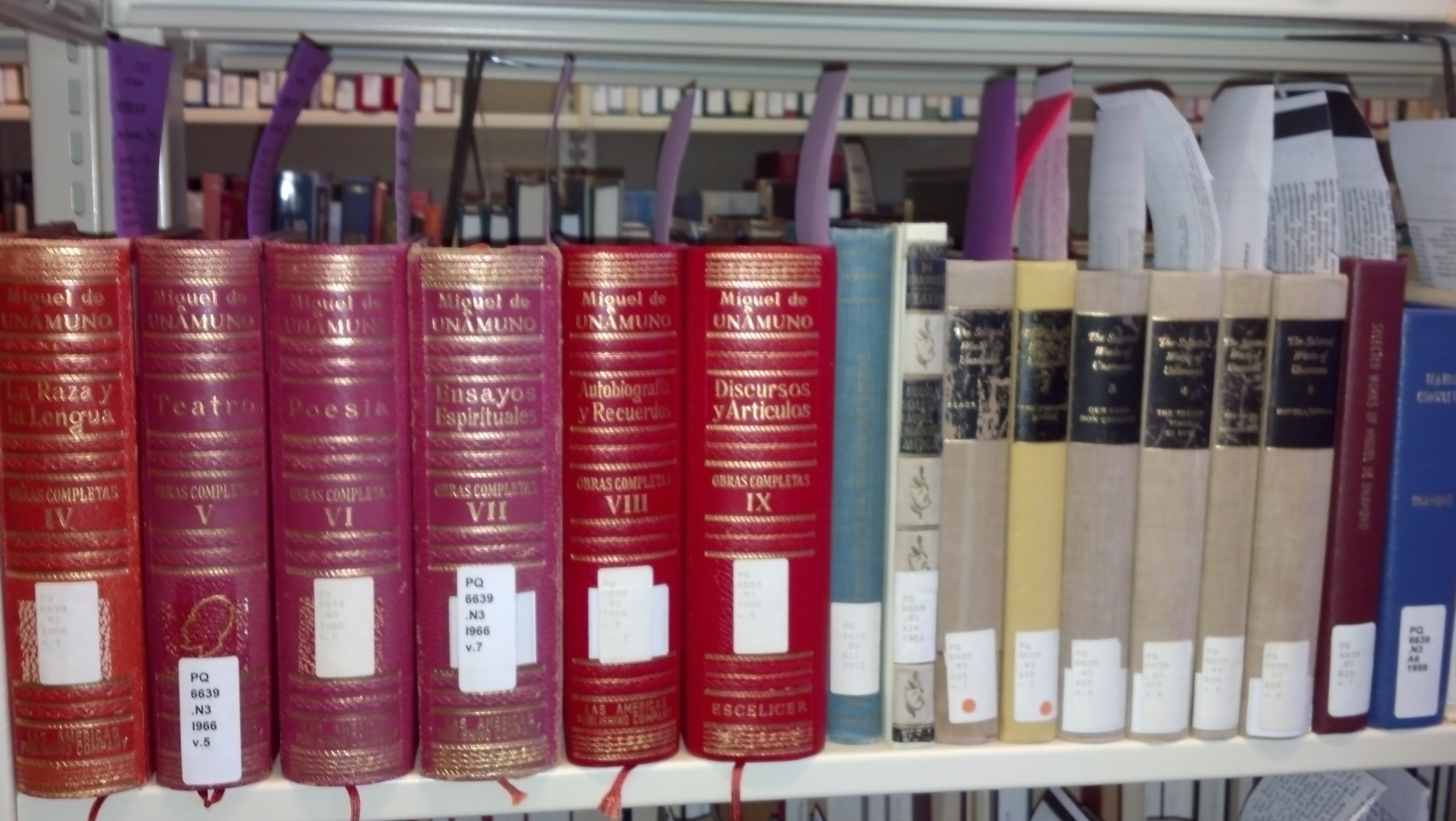 We were warned that this was coming, and invited to look through the books flagged for removal, with a chance to save the ones we wanted to keep. Early last month I had some extra time after spending the morning working on P&T files downstairs in the library and thought I’d go through the PQ stacks, expecting to find a few dozen tagged. When I came upon this I was completely overwhelmed! I saved what I could in the thirty minutes or so that I had to work on it, feeling sort of like the old beachcomber in that over-used story of the starfish: the one who comes upon hundreds of stranded starfish and begins throwing them back in the sea, even though there is no way he can save them all before they die in the hot sun. I saved what I could, mostly important literary histories, which I had come to first. But I only got to a few of the shelves, and there were literally hundreds more books that I couldn’t go through. When I spoke to our humanities librarian, who in turn spoke with the head librarian, we were given more time to be able to go through the stacks. I intended to get back, but it has been an incredibly busy semester, so yesterday was the first time I’ve been able to return. I was overwhelmed by the rows and rows of books with little slips of paper flagging them for removal. The sight of them inspired a feeling of panic, of helplessness, of incredulity. The only thing I could do was to start snapping pictures, to try to convey that feeling to others, and to ask some important questions of myself, and of our collective commitment to (paraphrasing Robert Darnton and others) the “future of books.”

Some of my reaction to this purging is connected to my own nostalgic connection to the materiality of books, and of libraries as spaces. I have extremely fond memories of graduate school, navegating the labyrinthine stacks of Alderman library at the University of Virginia, perusing the stacks for books, reading their spines, opening their covers,leafing through their contents, and finding gems I hadn’t expected. 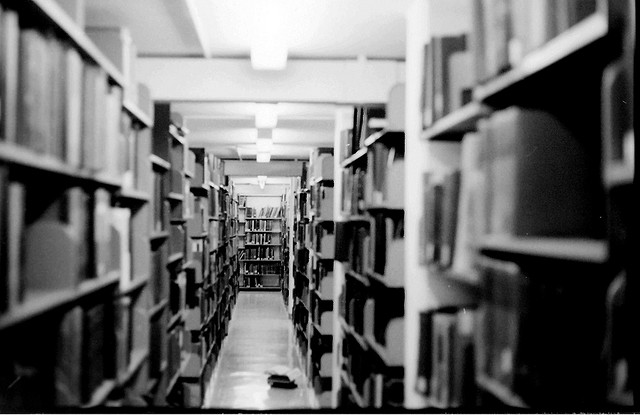 It wasn’t unlike the experience Jorge Luis Borges describes in his short story “La Biblioteca de Babel” (The Library of Babel), in which a library of endlessly connected hexagonal rooms filled with shelves of books, contains infinite knowledge:

“When it was announced that the Library contained all books, the first reaction was unbounded joy. All men felt themselves possessors on an intact and secret treasure. There was no personal problem, no world problem whose eloquent solution did not exist—somewhere in the hexagon. The universe was justified; the universe became congruent with the unlimited width and breadth of humankind’s hope.” (115)

Yet Borges’ library held many contradictions and problems. The allusion to the Biblical tower of Babel is underscored in the problem of unknown languages in the library, in the “impenetrable books…in ancient or far distant languages” (114). There also exists in Borges’ library an impulse to purge the unwanted, unused, unneeded, imperfect books::

Others, going about it in the opposite way, thought the first thing to do was to eliminate all the worthless books. They would invade all the hexagons, show credentials that were not always false, leaf disgustedly through a volume, and condemn entire walls of books. (116)

I’ve been a great advocate of new technologies in recent years. I firmly believe that endeavors like Google Books, Hathitrust, the Digital Public Libarary of America, Cervantes Virtual, and other virtual library collections have had the net effect of democratizing knowledge—of making information widely available to people all over the world who otherwise would not have had access to that information. In the words of Robert Darnton:

“Yes, we must digitize. But more important, we must democratize. We must open access to our cultural heritage. How? By rewriting the rules of the game, by subordinating private interests to the public good, and by taking inspiration from the early republic in order to create a Digital Republic of Learning (“Google and the Future of Books,” New York Review of Books, Feb 12, 2009)

As a faculty member in a small public liberal arts university with a relatively small library and travel budget, I’ve benefitted from access to these digital collections in my own research and teaching. But I never dreamed that easy access to digitized material might mean that the printed material we already own would disappear from my university library’s shelves. The fact that these important books haven’t been checked out in years I think is reflective of two things: 1) easy access to some of the same materials in digitized format, and 2) curricular changes–for example we no longer teach Portuguese, and there has been a change in focus in my department’s course offerings away from Spanish peninsular literature toward Latin American literature. As a result of both factors, there is less (or even no) interest or practical use for many of these books. To be honest, when writing this blog post, I myself did not march to the library to peruse the shelves. Instead, I consulted, from the convenience of my own living room late at night, the internet. I too am part of the problem.

But still, I can’t sit on the sidelines and let all those books disappear from my university’s library without making an argument for their importance–not only to me, but to our students and our institution. In Borges, the library is a symbol of his conception of the universe and of all human knowledge. Our library is both a practical space where students and faculty research and study, but just as important to me, it is also a symbol of the broad knowledge we seek for ourselves and our students as an institution of liberal learning.  Purging the shelves of those books may make room for other things (and I am unclear what will replace these missing volumes), but will the future of our library collections at institutions like mine, symbolize a conception of the liberal arts is not very liberal at all?

I can’t finish this essay without a reference to Don Quixote, coincidentally also flagged for removal from my library’s shelves. In chapters six and seven of the first volume, Don Quixote has come home from his first set of adventures, injured and delirious. As he sleeps, his friends decide the best thing for him would be to get rid of his collection of books of chivalry. After some deliberations, they burn all the books and wall up the entrance to his library. When Don Quixote awakes, the first thing he does is to look for his books:

the first thing he did was to go and look at his books, and not finding the room where he had left it, he wandered from side to side looking for it. He came to the place where the door used to be, and tried it with his hands, and turned and twisted his eyes in every direction without saying a word; but after a good while he asked his housekeeper whereabouts was the room that held his books.

The housekeeper, who had been already well instructed in what she was to answer, said, “What room or what nothing is it that your worship is looking for? There are neither room nor books in this house now, for the devil himself has carried all away.” (Chapter VI)

Will we, as professors, scholars, readers, find ourselves also wondering what happened to our beloved books and library??

Illustration by Gustave Doré, from Chapter VI o Don Quixote, translated by John Ormsby and republished by University of Adelaide