Before the spring semester gets too far behind me, I’d like to reflect on an experimental course that I taught last semester as a topics in culture course, and that I’d like to submit as a permanent addition to our curriculum in Spanish. I called it «Service and Social Action in Spain and Latin America.» It was a course that had its roots in my research and teaching on charity. However, I wanted the course to be more broadly focused to include various social problems and the ways different places, times and peoples have tried to solve them. The course objectives were:

Here’s a link to a longer description of the course and a copy of the syllabus (in Spanish).

There were many things about this course that from my perspective went very well, and that I’d like to keep and even expand in any future iteration of the course. First, I like the way that this course moved students beyond their simplistic notion of culture to a more nuanced consideration of what is unique about the way Spanish-speaking peoples have approached various social issues in modern times (meaning since the 16th century). In our yearly senior exit interviews, students claim to want more culture (and conversely less literature) in their coursework, but often culture for them means chimichangas, flamenco music and learning to dance the salsa. While I love all of those aspects of Latin culture (and more!), I also want students to have a much deeper understanding.  In our first class meeting we discussed the multiple definitions of culture–from the artistic and intellectual production of «high culture», to culture as a set of ideas, beliefs and behaviors of a group, communicated through symbols. In the course we read literary and non-literary texts in Spanish; viewed contemporary and classic films from Spain, Latin America, and the United States; studied artistic works (drawings, paintings, photographs, sculpture and architecture).  Students contributed to the class their own findings about historical events, social and political movements, important political and religious figures, artists and musicians; as well as about contemporary organizations working to address social problems in the Spanish-speaking world.

Secondly I liked the way the course problemetized many of the topics of the course. For example, we talked about a culture of poverty as represented in Mexican art, film, and literature of the 1950’s. Students contrasted Juan Rulfo’s adolescent character Tacha with the adolescent protagonist Chachita of the classic Mexican film Nosotros los pobres by the Director Ismael Rodríguez, and compared these representations to the children depicted by Mexican photographer Lola Alvarez Bravo. Rulfo’s existentialism versus Rodríguez’s use of melodrama deepened our discussion of the legacy of the Mexican Revolution, as well as our own notion of the poor in the 21st century. Other attempts to get students to consider course topics in a nuanced and complex way were less successful. For example, we read two texts from Spain about women’s charitable work–one a late-Enlightenment poem «Oda a la beneficencia» by María Rosa Gálvez, the other a brief essay titled “No hay nada más bello que servir” published by the Sección Femenina de la Falange in one of their magazines for women during the early part of the Franco dictatorship. Students we able to question the notions of charity, sentimentality, goodness and beauty as inherently feminine qualitiesnot only in Latin culture of the past, but also in our own present-day US culture. However they were less able to identify the propagandistic qualities of these texts and the irony between what the texts claimed, versus what we know to be the historical reality.  Specifically, they took a fascist women’s group whose main aim was to serve the political purposes of an oppressive dictatorship, at its own word, and did not question the author or group’s motives behind the text.

All the while students developed their vocabulary in related fields such as medicine, politics, law, education, and social work, especially as it related to their individual service projects. They had to write and talk about their experiences frequently, both formally and informally. This was an area that I think was most beneficial to all of the students, despite their varying levels of linguistic competence–from non-natve speakers taking their first 300-level course, to native speakers who were advanced in their Spanish major. I would like to develop this area further for students so that all leave the course more confident in their ability to communicate well, and more able to communicate about topics that might have professional or personal significance to them.

Among the areas of the course that students complimented most, was a visit by a Mary Washington alum Brian Straight.  Brian spent two years in the Peace Corps in El Salvador after graduation, and since then has worked for the Department of Defense and for the State Department. His real life experiences of the issues we were studying really impacted the students. His life experiences also connected with what I see as a culture of service among our students at Mary Washington, something we had already highlighted in the course, especially in the work of graduates Jean Donovan and Shin Fujiyama. Many of the students were familiar with Shin’s work with Students Helping Honduras, but few noticed the small plaque outside Trinkle Hall in memory of murdered lay missionary Jean Donovan.  After watching the film Romero, learning about liberation theology, and the civil war in El Salvador, we take a field trip down campus walk to see how our own history–our culture of service and social action at Mary Washington, intersects with our object of study in the class. 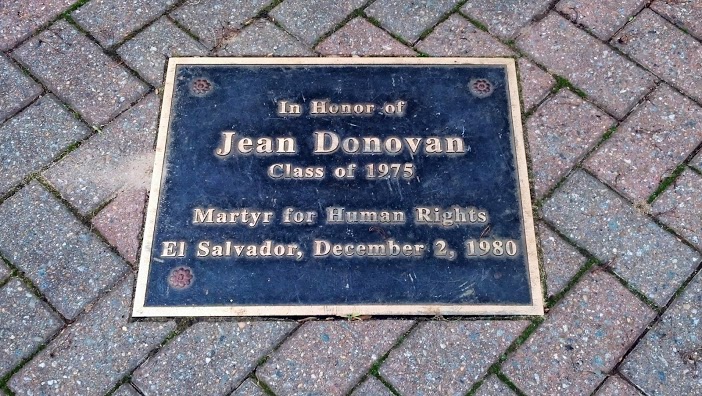 Students critiqued the 42 hour service requirement, something I struggled greatly with as I planned the course. In the future I might offer two options–one a service project, the other a research project, and then change the way I conduct and grade the discussion sessions. Still, service is essential in my mind to this course, even if that service is not directly related to Spanish or Spanish-speaking people. So many of the issues we discussed students saw in action in their service projects–both the good, the bad, and the frustrating.  Overall, it was a very rewarding course to teach, and, after some adjustments, I look forward to offering it again.