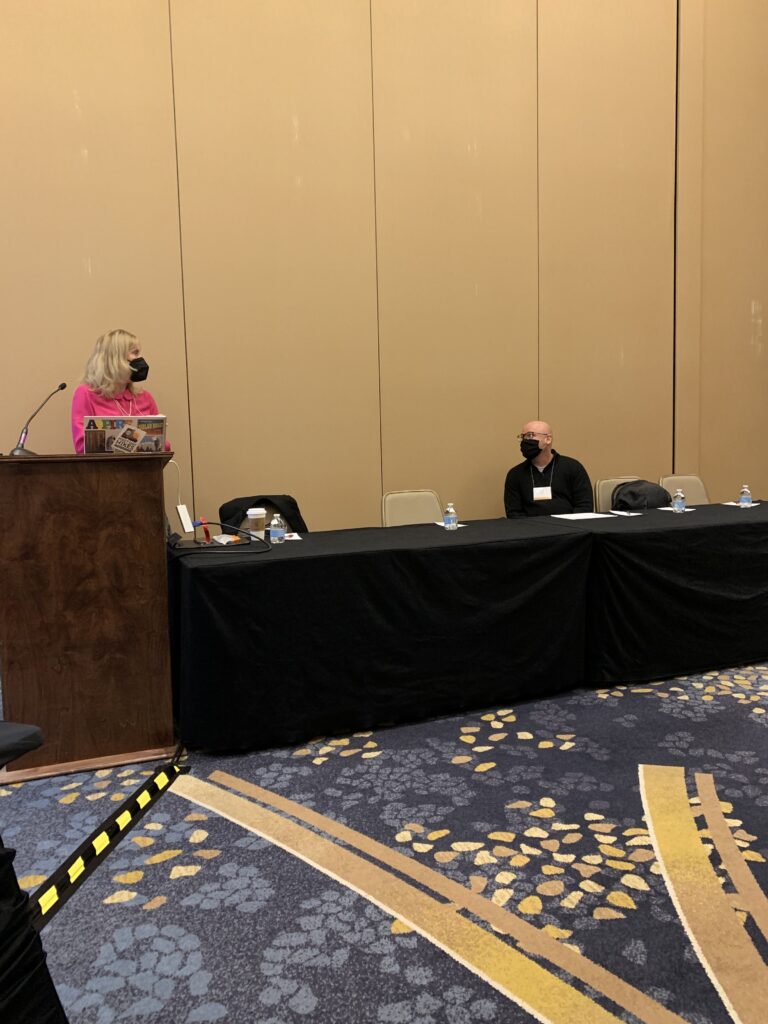 I recently attended the annual Modern Language Association meeting in Washington D.C. «Attended» is a relative term. With the rise of the omicron variant of the COVID-19 virus, and a history-making early January snow-storm, more than 80% of the sessions were moved to a virtual format. Of the in-person sessions, which our session decided to remain, there were still some participants who were unable to attend, and the cavernous halls of the DC Marriott and Convention Center were eerily empty.

And so it was that on January 9th, 2022, that I, along with two lovely new colleagues whom I met that day–Shirley Anghel, a graduate student in Spanish from Washington University in St. Louis, and Travis Landry, a professor of Spanish from Kenyon College–shared our thoughts with each other and our one audience member (a dear friend and colleague Cathy Jaffe, Professor of Spanish at Texas State University, and stalwart representative of the MLA/LLC 18th and 19th Century Spanish and Iberian) on the topic of Scientific Myth and Mythic Science in Eighteenth- to Nineteenth-Century Iberia.

My paper was titled “Verisimilitude, entertainment, and the perils of augmented reality in Enlightenment Spain.» It was a fun paper to research and write, and hopefully including the text and some of the slide images below might provide some mild «pseudo-intellectual» entertainment of its own.

“Verisimilitude, entertainment, and the perils of augmented reality in Enlightenment Spain”

In 1759, the Diario noticioso, curioso, erudito y comercial público y económico published an article announcing the performance of a linterna magica (magic lantern) at the home of actor Francisco Callejo. The article describes its unusually large projection screen “en el que se ven hermosas perspectivas de Jardines, Templos, Ciudades, Marinas, Cacerías, Fieras, y Figuras, tan extrañas, como mover los ojos, etc.” (212). Magic lanterns, which projected images onto a screen much like our modern projectors, were invented in the seventeenth century, but became hugely popular throughout Europe and the Americas in the eighteenth and into the nineteenth centuries. Seen as a scientific and technological curiosity, the linterna mágica was one of several optical devices—ranging from microscopes to totilomundi boxes—that captivated audiences gathered at scholarly academies, royal palaces, theaters, private homes, and public plazas to marvel at their reproduction of reality. The images projected by the linterna mágica transported the viewer into distant and unusual landscapes allowing them to experience them as if really there. And yet, this device was seen as frivolous, and even dangerous by many ilustrados, especially when viewed by certain groups and in certain contexts. Writers warned of the illicit emotions that such images might provoke in the viewer and of the idleness that it might encourage, especially for certain groups. Today, we will examine various accounts and depictions of magic lanterns and totilimundi from early critiques by Benito Feijoo and Diego Torres Villarroel, to the social satire of Félix María de Samaniego later in the century, and comic visual images on the page and on the stage of the early nineteenth century by Francisco de Goya and María Rosa Gálvez. Departing from eighteenth-century ideas on the importance of verisimilitude, especially as expressed by Ignacio de Luzán in his Poética (1737) and following through to Jovellanos´ recommendations in his Memoria para el arreglo de la policía de los espectáculos y diversiones públicas y sobre su origen en España (1796), we will consider how sometimes an artistic representation of reality can be too realistic, and how the linterna mágica challenged Enlightenment notions of art, entertainment, class, and gender for Spain´s ilustrados.

Ignacio de Luzán’s concept of verisimilitude in his Poética (1737) grew out of the Aristotelian concept of poetic mimesis:

Many eighteenth-century writers believed that social class affects this opinion of what rings true or not in art, and Luzán identifies two verisimilitudes:

The role of the Enlightenment artist, then, becomes to produce believable objects that delight its readers/spectators, but that are useful—Horace’s utile dulci—which María José Rodríguez Sánchez de León associates with the emergence of bourgeois culture in Spain[1].

In his Memoria para el arreglo de la policía de los espectáculos y diversiones públicas… (1796), Gaspar Melchor de Jovellanos is careful to make a class distinction when it comes to entertainment. For the working class, Jovellanos believes that they need “diversiones pero no espectáculos” (121) while for the second group, Jovellanos argues for government mandated reform of dramas “capaces de deleitar e instruir” (132), where spectators will be inspired to such bourgeois values as reverence and respect, patriotism, and faith.  Among the spectacles Jovellanos criticizes are linternas mágicas and totilimundis: “aunque inocentes en sí, están depravadas y corrompidas por sus torpes accidentes” (135)

Magic lanterns projected images on a wall or screen in a darkened room, while totilimundi (also known as tutilimundi, mundinovi, mundinuevo, etc) consisted of a closed box into which a single spectator could peer through an eyepiece. While magic lanterns were most often shown to smaller groups in private homes and tended to be associated with the middle or upper classes, totilimundi was a popular entertainment available outdoors in plazas to anyone who could pay the fee of the itinerant vendors. Both made use of moving images and of narration, and some of the common themes of their presentations included classical mythology, the supernatural, war, and other exciting scenes. Their names—magic lantern/all-the-world—alluded both to their popularity as well as their all-encompassing subjects, seemingly presenting everything as if by magic.[2]

Benito Feijoo describes a magic lantern in the second discourse of the third volume of his Teatro crítico (1729), in an essay titled “Secretos de la naturaleza” in which he explains in great detail the mechanics of these “catoptric” devices, to prove to those “ignorantes del artificio” that they are not magic at all, but rather science (Section III, paragraphs 12-13), a combination of light, mirrors, and optical lenses.

One year after Feijoo’s scientific description of the magic lantern, Diego Torres Villarroel published an account titled “Mundi novi” in his “Pronóstico” of 1730. Torres describes how he came upon the device and its peddlers: “Venía por la calle del Lobo un extrangero […] Era un viejo que frisaba con los cincuenta años […] Cosido a par de sí estaba un mozo, como de veinte años, machucado de narices, hundido de ojos… (125). The young man sets out a strange box and in cuasi Italian called to the crowd: “Vengan señori/al mundo novi,/verán por un quarti/en esta parti/la forneira, la butifarra, lo malo casati,/ tuti le enferni,/ y tuti le diable”.  While the commonfolk took turns looking into the box in the street–delivery boys, cleaning ladies, and loiterers–Torres Villarroel invites the pair to give a private show in his home. The proliferation of scenes presented to him and his family—from a Bacchanal feast to battles, fires, shipwrecks, and even references to contemporary political events—are each associated with a season of the year, and Torres Villaroel’s ironic descriptions of the spectacle inside the mundi novi box point to the hypocrisy of the world outside it too.

Germán Labrador Méndez compares Torres Villarroel’s account of the mundi novi with a piece by Goya, “Tutti li mundi” (produced between 1808 and 1814) depicting a man as he peers into the eye-piece of the tuttilimundi box. Yet while he is absorbed into the world inside the box, he is unaware of the spectacle his split pants create for others outside, namely a woman who laughs at his bare bottom raised in the air. Goya’s burlesque treatment of the subject of the tuttilimundi phenomenon underscores his ridicule of this popular form of entertainment, where images captivate their unsophisticated viewers to their detriment.  But it is the poet Felix Samaniego who takes this irreverent style even further in a poem from his unpublished collection Jardín de Venus, titled “La linterna mágica.” In it, a novitiate is caught masturbating. When asked what aroused him, the novitiate describes various scenes of his “linterna mágica,” which is not a device at all, but rather his own imagination “ardiente y viva […] porque en las ilusiones que me ofrece/una linterna mágica parece” (ll 28-31).

But while the images inside a young man’s own mind are enough to inspire his sinful thoughts and actions, in another Samaniego poem, images are not enough. The fábula “El mono y el titiritero” narrates the case of a monkey that invited his animal friends for an afternoon of entertainment while his master was away. The culmination of his show was a scene from his master Maese Pedro’s magic lantern, which he narrates with great enthusiasm, except that he forgets to light the device, proving the fable’s moral “ sin claridad no hay obra buena.”  The animals, both performer and spectators, lack the understanding and sophistication to create or understand good art.

A magic lantern is the comic device around which dramatist María Rosa Gálvez (1768-1806) builds her own criticism of pedantry, false erudition and bad literature in her play Los figurones literarios (1804)[3]. In it, young lovers Isabel and Alberto, confront the extravagant behavior of their parents and their parents’ friends. The older characters—which include Alberto’s father and Isabel’s uncle, don Panuncio, along with Panuncio’s friends such as don Cilindro the inventor—mistake their interest in pseudointellectual topics as proof of their great erudition.

Among the visual signs of their intellectualism is Don Cilindro’s magic lantern, which he has dubbed “linterna energúmena” or a “maniac’s lantern” (and one wonders, did he mistakenly think energúmena a scientific term?)  He prepares to present a show with his device.

But just as don Cilindro begins, Panuncio realizes that it is time for a comet to pass overhead and he urges everyone to come look through another optical device, his telescope. The characters comically move back and forth between the two devices, unable to appreciate either event, until the lantern falls and breaks.  When the mother, doña Evarista laments to her daughter “no te has divertido/con la máquina, y lo siento” Isabel responds “con otras cosas, madre mía, me divierto” (II, x).  Isabel watches the spectacle unfold before her, from the debacle of the magic lantern and telescope, to a failed play by her uncle Panuncio titled “El contraste contrastado.” Another of Panuncio’s pedantic friends, the poet don Esdrújulo, believes the play would have been more successful with something more “inverosimil” and exciting to produce a “golpe teatral” such as “un consejo de guerra,/un incendio de cohetes” (Act III, scene X)—which are similar to the scenes Torres Villaroel described in his “Mundi novi.” In the end, Isabel convinces her uncle to reject his fancy devices, pseudo-intellectual obsessions, and false friends, and instead to embrace the bourgeois values of quiet family life.

The story of a middle-aged man’s ridiculous behavior improper for his age and status, encouraged in his obsessions by a group of silly friends, bring to mind the quintessential Spanish madman Don Quijote.  Several of the aforementioned depictions of magic lanterns and totilimundi make clear reference to the Quijote. Torres Villarroel describes the itinerant totilimundi peddlar of his pronóstico as: “un viejo que frisaba con los cincuenta años” (125), and in Samaniego’s fable, the Quijote’s Maese Pedro’s famed puppet show becomes a magic lantern. Just as Cervantes had before them, the ilustrados saw the importance of entertainment through art[4]. They imagined a world where the working class enjoyed innocent leisure time and the leisurely class delighted in spectacles that modeled Enlightenment bourgeois  ideals. But while ilustrados were attracted to the popular technology of their time, they also saw the perils of putting devices like magic lanterns and totilimundi in the hands of uneducated monkeys and pseudointellectuals.

Their concerns were not new in the eighteenth-century, and they continue into our current age, as businesses, governments, parents, and even lawyers debate the virtues and perils of the technological descendants of the magic lantern in our own modern devices for virtual and augmented reality.