I’ve just returned from my first digital humanities conference, the Segundo Encuentro de Humanidades Digitales (2EHD) hosted by the RedHD (a group based in the Universidad Autónoma de México-UNAM) at the Biblioteca Vasconcelos in Mexico City. 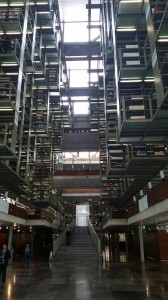 While I had attended some sessions at MLA and ASECS on digital humanities before, and participated in an MLA DHCommons workshop and a THATCamp ASECS, I still feel pretty new at DH (or HD in Spanish) stuff, plus I’ve really wanted to meet digital humanists who work in Spanish. This was a great conference for me, and I feel like I’ve come away with a better understanding of some of the DH/HD work going on in Latin America and Spain, and I’m glad to have had the opportunity to meet some great people doing very interesting work. In this post I want to share some of the sessions and information that I found interesting and pertinent to my own work. I have to confess I didn’t go to all the sessions. The conference went all day from 9-6 for three days, plus two days of pre-conference workshops. But I also had never visited Mexico City before, and experiencing all the historic sites, and museums that I’ve read about—even taught to my students—but never experienced, was also important to me not only personally, but also professionally. So, all the great information I’m about to share is only a fraction of what went on at this conference, and what I present is really from my point of view, as a professor of Spanish from a small public undergraduate liberal arts institution in the United States who is still discovering DH. Still, I think it might be of interest to others who, like myself, would like to know more about Humanidades Digitales.

Some of the sessions dealt with libraries, digital collections, and digital archives. I heard a presentation from Alberto Martínez of the Biblioteca Daniel Cosío Villegas at the Colegio de México in Mexico City, detailing plans for their Proyecto Biblioteca Siglo XXI, in which they are working towards something very similar to our own Convergence Center at Mary Washington, seeking similar connections between libraries, technology, research, and teaching. I also heard about digitalization initiatives by the Mexican Institución Nacional de Antropología e Historia, and the Fondo Antiguo of the BIblioteca Central of the UNAM. Beth Plale of Hathitrust gave one of the keynote talks on her work at the Hathitrust Research Center, explaining some of the tools and resources available to researchers (both from member institutions, and non-member institutions) and demonstrated a few examples of what could be done. Her main point is that the idea of massive scale being the future of DH research was already a reality with their collection of 11 million volumes. However, she also cautioned that because of the problems of copyright, two thirds of that 11 million are not available in full text to the users. So they have developed tools that will allow researchers to collect large quantities of data from all the volumes of the Hathitrust collection, returning only the data requested but not the full text, which they believe to fall under “fair use”. Some in the audience questioned the validity of such limited views, similar to the “snippet view” in Googlebooks. Others questioned errors in the Optical Character Recognition (OCR) of the texts. Clearly Hathitrust is making some progress in this idea of massive scale, but we’re not there yet either technically or legally. This connected to some of the more theoretical questions of the conference. For example, Glenn Worthey, a digital humanities librarian at Stanford University, argued that DH research focused on the text is rooted in Russian formalism, now possible on a much larger scale than, for example, Vladimir Propp could detail almost a hundred years ago in his Morphology of the Folk Tale.

There were some interesting projects and new applications presented. RedHD has developed a questionnaire that will help guide students and researchers as they evaluate their digital projects to make sure they are following best practices, following MLA guidelines, something I could really benefit from with my digital humanities work with my own students (and the topic of my poster presentation of my undergraduate research project «Women and Charity in Spain»). 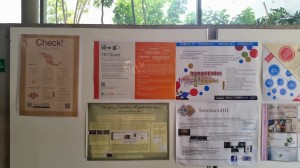 Rocío Romero and Alberto Rodríguez of the Universidad Autónoma Metropolitana Azcapotzalco(UAM-A) presented their website on the essay «Del ensayo y su escritura», which presents students with important characteristics of the essay, the works of major Mexican essayists, and a space for them to present their own essays (similar to an approach that I take in my Escritura Avanzada course).

I learned about some important digital humanities centers and digital initiatives in Spain, Latin America and the US. In Spain, Nuria Rodríguez Ortega, an art historian at the University of Málaga spoke about her university’s ArtHis_Lab and their multiple digital initiatives to promote art and digital culture in the Spanish speaking world. Esteban Romero-Frías, a sociologist at the University of Granada, spoke about numerous projects that his group GrinUGR has begun, promoting digital studies and digital pedagogy in Spain. Like ArtHis_Lab, this group is very interested in the idea of “public digital humanities” and Dr. Romero pointed to several initiatives directed beyond the academy.  Elena González-Blanco García of the Universidad Nacional de Educación a Distancia (UNED) shared her group LiNHD (Laboratorio de Innovación en Humanidades Digitales) and a new certificate program (taught on line) they’re offering a summer course this June digital humanities in Spanish for students, researchers, professionals, and anyone else interested, with more planned for the future. In Mexico, there are several groups working along similar lines. RedHD, the hosts of the conference, sponsors a Seminario HD, which seems a bit similar to some of the ideas emerging from Mary Washington’s own Digital Scholars Institute. Iván Martínez, of the UNAM and also representative of Wikipedia Mexico and president of the board of directors of the Wikimedia Mexico Foundation, spoke of efforts to add more content about Mexico to Wikipedia, and of guidelines to help contribute to the project. Mexico will be hosting Wikimania 2015 at the Vasconcelos! The Department of Philosophy at the UNAM has begun to look into the relationship of philosophy and technology in their project Seminario Tecnologías Filosóficas. Alex Gil, of Columbia University, and Barbara Bordalejo of the University of Saskatchewan, spoke of their work with Go-DH (Global Outlook::Digital Humanities) and efforts to network and create working groups for digital humanists all over the world, with special emphasis in countries not often represented in current anglo-centric DH centers.

Which brings me to my final take-away, and really why I wanted to come to this particular conference—that is the presence of digital humanities in Spanish. One glaring problem with initiatives like Hathitrust, that Beth Plale didn’t really address in her talk, is the under-representation of Spanish. According to Plale’s statistics she shared, of the 11 million volumes that form their collection, only about 300,000 are in Spanish—that’s less than 3%! And Hathitrust is not the only place where Spanish is under-represented. DH is thus far an anglo-centric field. Elika Ortega (University of Western Ontario) and Esteban Romero-Frías highlighted in their presentations problems with surveys like Centernet whose map of digital humanities centers focuses heavily on English-speaking and European countries, and doesn’t represent as well DH/HD activity in Spanish speaking countries. MapaHD and Atlas de Ciencias Sociales y Humanidades Digitales are two projects that have tried to map digital humanities in Spanish. MapaHD, through a questionnaire distributed through social media and various email lists, collected information from 80 self-declared digital humanists in Spanish and Portuguese, and found that the largest group of them were located in Spain (24), followed by Mexico (14), Portugal in third place (13), United States fourth (7), and United Kingdom (5) and Argentina (5) tied for 5th place. The majority of respondents identified their research as related to literary studies, followed by history, information science, linguistics, visual arts, and philosophy, although there was much overlap between these fields. They are creating digital editions, doing digitalization of texts and images, and creating databases among other activities.

I definitely left this conference with a sense that there is a lot going on in DH/HD in Spain and Latin America, and I hope to see more Hispanists in the US and the UK learning from them and collaborating with them, as I hope to do. I also am more convinced than ever of the importance for those of us teaching students of Spanish language, literature, and culture to include digital humanities and digital studies in our curriculum, because cultura digital is part of the many culturas that speak Spanish, and is an undeniable and ever-increasing part of all of our present and future.